skip to main | skip to sidebar

This is a promotion image for a tv movie called SHARK SWARM. 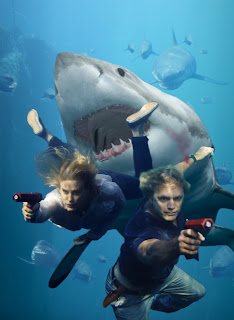 Its about sharks eating people because there is ocean pollution everywhere. Daryl Hannah and John Schneider play scientists who use lazer tag guns from my childhood to humanely stop the sharks from eating people.
I watched the trailer, and it really doesn't live up to the awesomeness of the poster. That image inspires me to finally sit down and write my ocean opera about a team of shark assassins. Im pretty sure if I found my trapper keeper from middle school, I would have a bunch of concept sketches for this project.
Posted by Erik Benson at 2:54 PM 8 comments:

Free internet links to other artists...